Parrying a Jo with a Jo

When a Jo is parried with a Jo, Uke's force is deflected by striking Uke's Jo at an angle to its direction and this has the effect of unbalancing Uke. Unbalancing Uke can either be used to control him or slow down his response to a counter attack as he concentrates on recovering his balance. A thrust can be parried either to the left, right, down or up. The action of parrying is the same as that of Aiki where Uke's attacking force at the point of contact between the Jo's is effectively divided into two perpendicular components with one component resisted and the other unresisted - Aiki-Parry. The resisted component is in the direction of Tori's Jo and the unresisted component is in the direction that Uke's Jo slides off Tori's Jo. This is in contrast to applying Aiki in Aikido and Aikijujutsu where sliding between Uke's and Tori's body parts, e.g. arms, at the contact point is generally not possible and therefore the contact point needs to move so as not to resist one component of Uke's force.

The diagram below is a plan view that shows Uke's forces at the contact point when Uke's Jo is parried to the right as it is thrust towards Tori. Similar diagrams can be drawn when Uke's thrust is parried in the other directions.

Parrying is also used in the art of european sword fighting  and boxing. 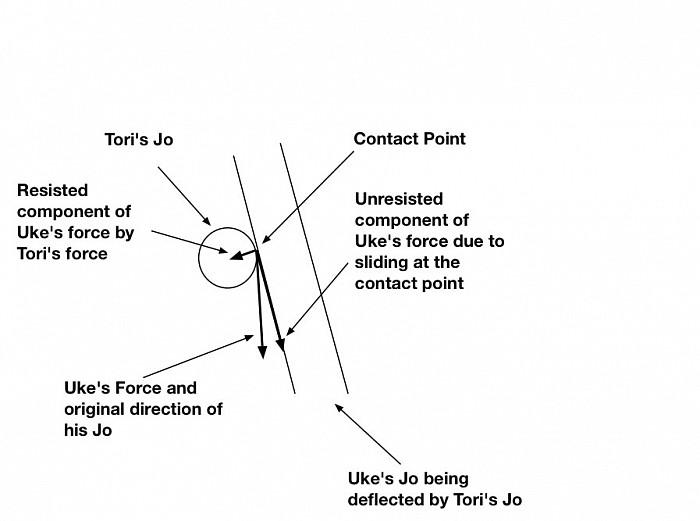 Applying Aiki with a Jo
Made with SimDif
Alun Harris